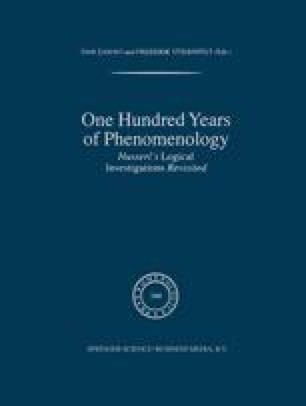 One Hundred Years of Phenomenology pp 31-40 | Cite as

The Logical Investigations: Paving the Way to a Transcendental Logic

Phenomenological Description Intentional Content Logical Objectivity Transcendental Phenomenology Proper Object
These keywords were added by machine and not by the authors. This process is experimental and the keywords may be updated as the learning algorithm improves.

Soon after the publication of the Logische Untersuchungen the reproach was cast that the phenomenological investigations demanded there under the name of the “clarification” of the fundamental concepts of pure logic, investigations which the second volume attempted to block out in broad outline, signified a relapse into psychologism.... The obscurity still generally prevalent today concerning the problem of a universal epistemological psychologism... is something that, at the time, I myself had not entirely overcome; though precisely the “phenomenological” investigations in the second volume, so far as they paved the way to a transcendental phenomenology, opened up at the same time the necessary avenues to the setting and the radical overcoming of the problem of transcendental psychologism.1

Cite this chapter as:
Drummond J.J. (2002) The Logical Investigations: Paving the Way to a Transcendental Logic. In: Zahavi D., Stjernfelt F. (eds) One Hundred Years of Phenomenology. Phaenomenologica (Series Founded by H.L. van Breda and Published Under the Auspices of the Husserl-Archives), vol 164. Springer, Dordrecht. https://doi.org/10.1007/978-94-017-0093-1_2