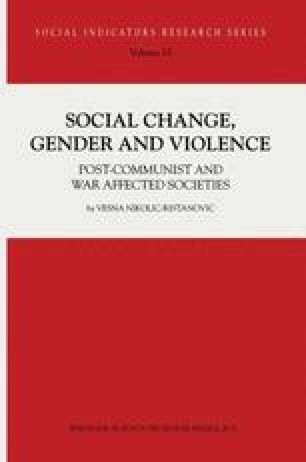 As shown in the previous chapter, and similar to other post-communist countries, economic and political changes in all countries included in the survey led to changes in GDP, employment and real wages. Both economic development and the level of employment are closely connected to the level of privatization and the level of foreign investment, as well as to the direct or indirect impact of war, i.e. the intensity of that impact. The combination of severe recession and deeply flawed tax systems led to a large decline in government revenues as well. Although, because the communist state was so costly, the revenue decline was not a bad thing in itself, it had several quite negative consequences. First, it impaired the functioning of vital state institutions and made reform of institutional arrangements extremely difficult (UNICEF, 1999:9). It also led to the abolition of many social benefits, subsidies and services as well as to continual increases in taxes. And finally, one of the consequences of economic recession and punitive tax systems and costly and corrupted bureaucratic procedures was the growth of the informal sector and its associated labor markets. The growth of the informal sector (both ‘shadow’ and illegal economy) was a prominent feature of the transition economies of all countries included in the survey. However, it was especially apparent in connection to UN economic sanctions imposed on Serbia, which prevented trade and financial transactions with other countries, opening a large space for illegal activities, including organized crime. It especially generated fuel and weapons trade and foreign currency transactions, in Serbia as well in other countries included in the survey as Serbia’s immediate neighbors (Bolcic, 1995:87). Transition from communism was also followed with an enormous increase in traditional crime, especially property crime and violence, with an additional impact of war on the increase of crime in Serbia.

Real Wage Informal Sector Private Firm Financial Situation Private Business
These keywords were added by machine and not by the authors. This process is experimental and the keywords may be updated as the learning algorithm improves.
This is a preview of subscription content, log in to check access.