Aquinas’s Philosophical Commentary on the Ethics 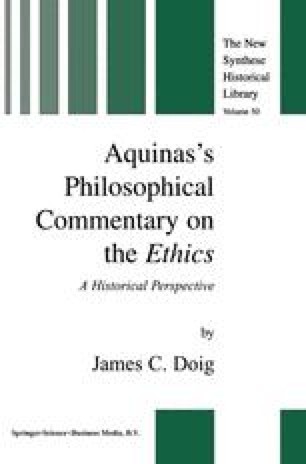 The SLE in its Historical Context

In the preceding Chapters, numerous doctrines and passages of the SLE were viewed in historical context. On that basis, the SLE was characterized as Aquinas’s statement of what he believed to be the correct moral philosophy that might be legitimately proposed in a commentary on Aristotle’s Ethics. However, the discussions permitting that conclusion, of their nature, militated against seeing in its historical setting the SLE’s moral philosophy as a whole. The present Chapter offers a partial remedy for that situation by proposing in outline form the orderly development of the doctrine offered by Aquinas as he moves through the ten books of his commentary.

Human Agent Historical Context Moral Philosophy Moral Virtue Intellectual Virtue
These keywords were added by machine and not by the authors. This process is experimental and the keywords may be updated as the learning algorithm improves.
This is a preview of subscription content, log in to check access.