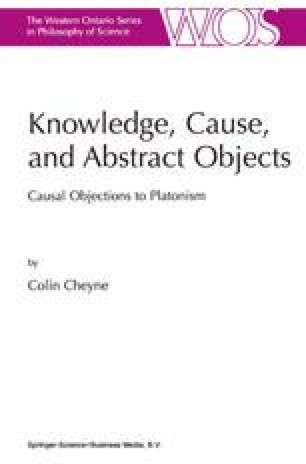 Chapter
Part of the The Western Ontario Series in Philosophy of Science book series (WONS, volume 67)

In my introductory chapter, I noted John Burgess’s complaint that there has been no sufficiently detailed defence of the causal objection to platonic knowledge (Section 1.5). In particular, he complains that Benacerrafs 1972 sketch of the objection remains ‘the most detailed in the literature’ (Burgess 1990, p. 3). Perhaps he overlooked a paper by Penelope Maddy (1984) that examines the issue with some care, although, to be fair, her defence of the objection is somewhat equivocal. More recent work by Hartry Field (1989, pp. 25–30) and Albert Casullo (1992) also presents versions of the anti-platonist case with vigour and in some detail.1 Even more recently, Burgess himself, with Gideon Rosen, presents a balanced and detailed assessment of the epistemological difficulties for mathematical platonism (Burgess & Rosen 1997, pp. 26–60). My book-length defence of the causal objection finally lays Burgess’s original charge to rest. The causal objection to platonic knowledge has now been argued in detail.

Recent Work Positive Case Abstract Object Detailed Assessment Plausible Theory
These keywords were added by machine and not by the authors. This process is experimental and the keywords may be updated as the learning algorithm improves.
Download to read the full chapter text