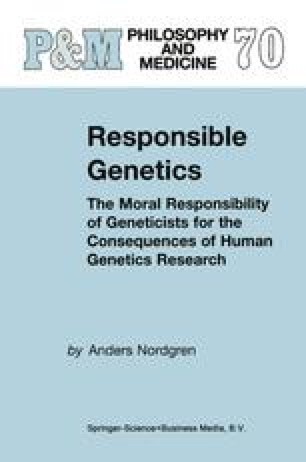 The rhetoric of ‘responsibility’ is prominent in the research ethics debate, not least in discussions about genetics and genetic engineering. It is also very common in political and religious discourse. But the term is elusive. It is seldom defined. It is also a rather new term in Western ethical discourse. The term ‘responsibility’ first appeared in English, German and French in the 17th century (Jonsen, 1968, p. 3). However, it has its etymological roots in the Latin word ‘respondeo’, which actually has two different but connected root meanings. In the first sense, the term has to do with ‘answering’. For example, it could be a matter of giving an answer when called to appear in a legal court or another tribunal. In the second sense, the word ‘respondeo’ is related to ‘accounting’. We owe things to others due to promises or financial debts. It is also possible to see accountability as a special form of answering to others (Schweiker, 1995, pp. 55–56).

Moral Responsibility Moral Reasoning Virtue Ethic Social Model Moral Imagination
These keywords were added by machine and not by the authors. This process is experimental and the keywords may be updated as the learning algorithm improves.
This is a preview of subscription content, log in to check access.