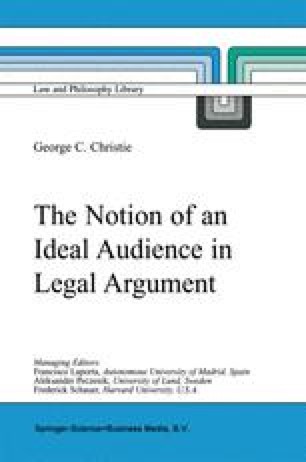 The Notion of an Ideal Audience as an Analytical Tool

There is a passage towards the end of the monumental Treatise of Human Nature, in which Hume addressed himself to the question of how good government and human progress are at all possible. Hume started from two important premises: first, that men were naturally endowed with only limited altruism; and second, that they had a natural tendency to prefer short-run advantages, even at the expense of what was in their long-term interest. Given these assumptions, how was the material and social betterment of the human condition possible? To answer that question in the affirmative, Hume resorted to an ingenious expedient. He suggested that an affirmative answer was possible because in a well-functioning society, such as the Great Britain of his day, one could create a class of leaders and load them down with economic and social advantages, thereby creating a ruling class which had a short-term interest in maintaining the stability and proper functioning of society. Moreover, through this arrangement, one could do more than maintain the status quo. In Hume’s own words:

But government extends farther its beneficial influence; and not contented to protect men in those conventions they make for their mutual interest, it often obliges them to make such conventions, and forces them to seek their own advantage, by a concurrence in some common end or purpose. There is no quality in human nature, which causes more fatal errors in our conduct, than that which leads us to prefer whatever is present to the distant and remote, and makes us desire objects more according to their situation than their intrinsic value. Two neighbors may agree to drain a meadow, which they possess in common; because ‘tis easy for them to know each others mind; and each must perceive, that the immediate consequence of his failing in his part, is the abandoning the whole project. But ‘tis very difficult, and indeed impossible, that a thousand persons shou’d agree in any such action; it being difficult for them to concert so complicated a design and still more difficult for them to execute it; while each seeks a pretext to free himself of the trouble and expence, and wou’d lay the whole burden on others. Political society easily remedies both these inconveniences. Magistrates find an immediate interest in the interest of any considerable part of their subjects. They need consult no body but themselves to form any scheme for the promoting of that interest. And as the failure of any one piece in the execution is connected, tho’ not immediately, with the failure of the whole, they prevent that failure, because they find no interest in it, either immediate or remote. Thus bridges are built; harbours open’d; ramparts rais’d; canals form’d; fleets equip’d; and armies disciplin’d; every where, by the care of the government, which, tho’ compos’d of men subject to all human infirmities, becomes, by one of the finest and most subtle inventions imaginable, a composition, which is, in some measure, exempted from all these infirmities.1

Death Penalty Supra Note Basic Norm Legal Norm Lower Court
These keywords were added by machine and not by the authors. This process is experimental and the keywords may be updated as the learning algorithm improves.
This is a preview of subscription content, log in to check access.