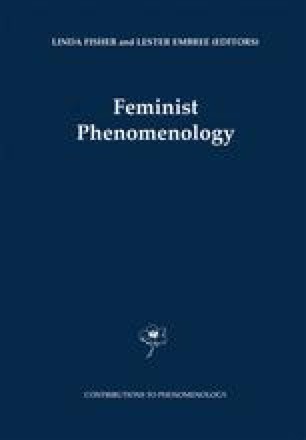 A Different Voice in the Phenomenological Tradition: Simone de Beauvoir and the Ethic of Care

In terms of her philosophical orientation, Simone de Beauvoir is usually identified merely as an existentialist. Up until now not enough attention has been paid to the phenomenological roots of her thought. Of course existentialism in its most well-known form, i.e., the early work of Jean-Paul Sartre, is itself an extension of the central phenomenological themes of Husserl and Heidegger. But Beauvoir, it can be argued, incorporates phenomenological perspectives into her work to an even greater degree than does Sartre. Witness, for instance, the way that she interweaves Merleau-Ponty’s views about the lived body into her analysis of women’s experience of their oppression in The Second Sex.1 Another central feature of Beauvoir’s work is the way that it incorporates the foundational phenomenological concept of the situated subject. A central tenet of phenomenology, fully validated by existentialism, is that the living subject always finds itself “in situation,” that is, in a highly particular and particularized complex of circumstances. This insight founds much of Beauvoir’s analysis in The Second Sex, especially in the second volume of the work, titled in the original “L’expérience vécue.”2 Even Beauvoir’s earlier writings on ethics, I have found, assume a phenomenological understanding of the subject as situated.3

Moral Ideal Joint Project Care Tradition Phenomenological Tradition Feminist Ethic
These keywords were added by machine and not by the authors. This process is experimental and the keywords may be updated as the learning algorithm improves.
This is a preview of subscription content, log in to check access.

Cite this chapter as:
Arp K. (2000) A Different Voice in the Phenomenological Tradition: Simone de Beauvoir and the Ethic of Care. In: Fisher L., Embree L. (eds) Feminist Phenomenology. Contributions to Phenomenology (In Cooperation with the Center for Advanced Research in Phenomenology), vol 40. Springer, Dordrecht