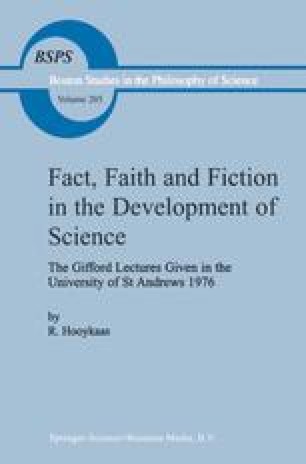 Fact, Faith and Fiction in the Development of Science pp 265-318 | Cite as

Works of Nature, Works of Art

We have contrasted scientific theories that claim to represent the reality of nature with those that are just useful fictions establishing connections between phenomena, without any claim to physical truth (chapter VIII). We now tackle a related problem — the comparing of natural products with similar ones made by human art.* In the case of chemical compounds, minerals and rocks, for instance, we could try to find out their composition by means of chemical analysis and then confirm this analysis by a synthesis out of the components. Supposing we find that human art is indeed capable of making things produced also by nature, immediately the question arises: can we find a procedure to make a natural product (e.g. sugar), minerals or rocks in the same way as nature does?

Human Mind Analogical Reasoning Natural Counterpart Artificial Production Vital Force
These keywords were added by machine and not by the authors. This process is experimental and the keywords may be updated as the learning algorithm improves.
This is a preview of subscription content, log in to check access.