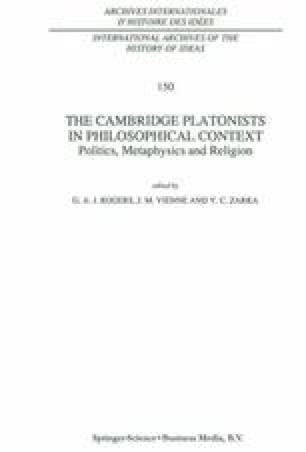 The Cambridge Platonists in Philosophical Context pp 197-214 | Cite as

Platonic Idealism in Modern Philosophy from Malebranche to Berkeley

The revival of Platonism associated with Cambridge philosophers such as Henry More and Ralph Cudworth was in part a reaction against Calvinism with its stress on faith rather than reason and its pessimistic view of human nature. It was not, however, the only revival of Platonism in England in the late seventeenth century. There was another more broadly European revival that lasted well into the eighteenth century. This new Platonism was in some respects significantly different, both in its inspiration and in its nature, from that of Henry More and his associates. The Cambridge Platonists largely regarded Descartes and the mechanical philosophy as a challenge and even a threat to religious faith. The new Platonism, by contrast, had its beginnings in a new perspective on Descartes and the mechanical view of nature in which they came to be regarded as actually conducive to piety. This new perspective came to be quite widely shared thanks to the popularity of the writings of Malebranche in whose thought Cartesianism was harmonised with an Augustinian Christian philosophy and theology.

Material Body Modern Philosophy Absolute Space Ancient Philosopher Early Eighteenth Century
These keywords were added by machine and not by the authors. This process is experimental and the keywords may be updated as the learning algorithm improves.

I owe a general debt to the work of André Robinet for a sense of the importance of Malebranche for Leibniz’s philosophy. I am also indebted to Charles McCracken’s Malebranche and British Philosophy (Oxford: Clarendon Press, 1983). Sarah Hutton has encouraged me to expect that Platonism continued to flourish in early eighteenth century England more than historians of the philosophy of that period have recognised. I am indebted for the discussion of an earlier draft of the paper at the Nantes Conference on “Le Monde des Platoniciens de Cambridge” in 1993, particularly to the contribution from Roselyne Degremont.