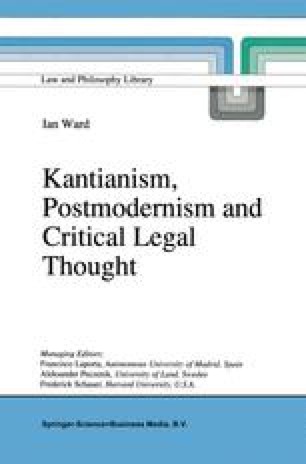 Critical Legal Studies and Beyond

The Critical Legal Studies movement has emerged as the bete noire of contemporary legal scholarship. The response to CLS has been often vitriolic, and too often hysterical (Carrington 1984, Price 1989). Radical pluralism has been perceived as threatening the very foundations of liberal legalism. Yet, as Andrew Altman has emphasised, CLS cannot be singularly determined. The alternative ‘radical’ and ‘moderate’ variants of CLS present very different visions, and the hallmark of the ‘moderate’ variant, as epitomised by such as Unger, is its affinity with a reconstructive liberal counter-critique. Pluralism provides the fuel for liberalism, and as we saw in the previous chapter, the ability of a consensus theory to ameliorate the pluralist critique is an explicit recognition that the Rawlsian thesis complements the Ungerian (Altman 1990).

Legal Reasoning Legal Discourse Legal Education Participatory Democracy Legal Interpretation
These keywords were added by machine and not by the authors. This process is experimental and the keywords may be updated as the learning algorithm improves.
This is a preview of subscription content, log in to check access.