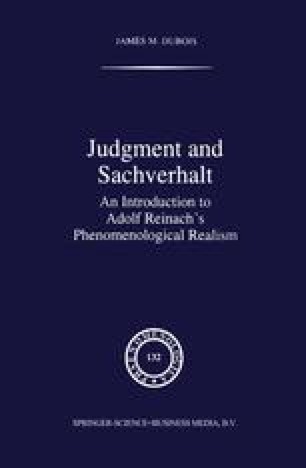 Referring to a passage quoted in our last chapter, Schuhmann (1987) observes that when Reinach, in 1913, spoke of “a new realm” opening up for philosophy he was referring to a dimension of “ontology or the apriori theory of objects” (p. 252). In the same year Husserl too was speaking of a new realm opening up for philosophy, but it was rather the realm of “pure consciousness”. Spiegelberg, in his article “Perspektivenwandel: Konstitution eines Husserlbildes”, tells us that as a student of law Husserl had pointed him to the work of Reinach. However, Husserl added that something more was needed than Reinach’s ontology, what was needed was a phenomenology of legal consciousness (Rechtsbewußtsein).116 To state the obvious, we might say with Schuhmann that “if one compares Reinach’s path from the theory of judgment to the theory of law with Husserl’s path from the Logical Investigations to the Ideas, then it becomes apparent that their paths of development did not run parallel to each other, but rather in opposite directions” (p. 252, my translation).

Logical Investigation Transcendental Idealism Pure Consciousness Legal Consciousness Phenomenological Attitude
These keywords were added by machine and not by the authors. This process is experimental and the keywords may be updated as the learning algorithm improves.
This is a preview of subscription content, log in to check access.