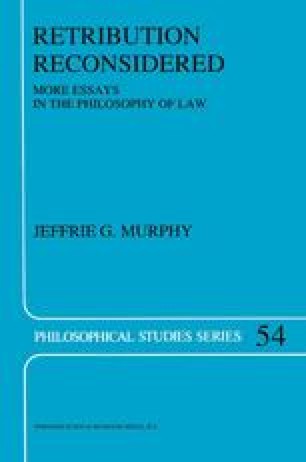 War, Self-Defense, and Defense of Others

Robert Holmes was one of my teachers, and I have long admired him for both his philosophical and his human excellences. I am thus delighted to contribute to a symposium that quite properly places his recent book at the center of attention for a discussion of the moral issues of war and peace.

Supra Note Moral Issue Interpersonal Relation Moral Justification Deadly Force
These keywords were added by machine and not by the authors. This process is experimental and the keywords may be updated as the learning algorithm improves.

This essay was presented (in my absence due to illness) at a symposium on Robert L. Holmes’s On War and Morality (Princeton: Princeton University Press, 1989) at the meetings of the American Philosophical Association in December of 1989.The symposium was also a group meeting of Concerned Philosophers for Peace. The other symposium participants were James Sterba and Robert L. Holmes. The essay is printed here for the first time.