Henry Home, Lord Kames, and the Scottish Enlightenment: A Study in National Character and in the History of Ideas 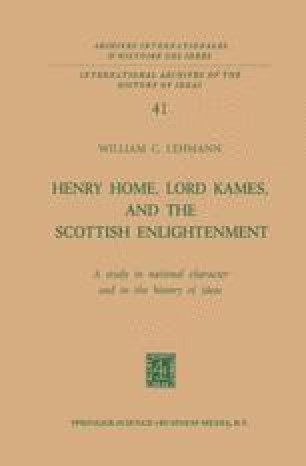 Henry Home, Lord Kames, and the Scottish Enlightenment: A Study in National Character and in the History of Ideas pp 255-269 | Cite as

Kames was called a “political economist” by his biographer, as well as lawyer, philosopher and critic — and he might have added “improver.” The term may not have had quite the same connotations then that it has for us today; and even today we do not always distinguish clearly between economic policy and economic analysis in the study of wealth phenomena. But in any event, the term does suggest the propriety of discussing his political theory and his economic theory in the same chapter. While Kames was perhaps more original in discussing the latter than the former, he did indeed give considerable attention to both, in their separate and distinctive character and in their relationship to one another.

Economic Theory Body Politic Economic Subject Favorable Balance American Coloni
These keywords were added by machine and not by the authors. This process is experimental and the keywords may be updated as the learning algorithm improves.

There are never wanting in society men who are qualified to lead, as well as men who are disposed to follow. (Kames)

Of all sciences, the science of politics is the most intricate; and its progress toward maturity is slow in proportion. (Kames)

The power of the state consists chiefly in the numbers and industry of its people. Everything must be of importance that contributes to that end. (Kames)