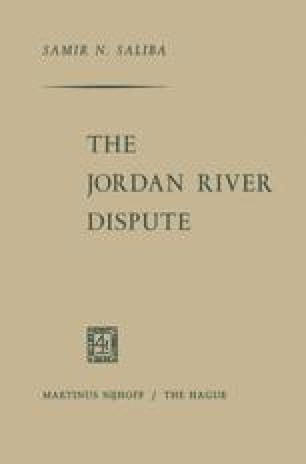 A simple fact fundamental to river development everywhere is that “rivers ignore political boundaries, that watersheds are not defined by political lines.”1 This fact, which the Unified Plan tried to realize, was ignored by the states involved in the Jordan River dispute. Instead of exploiting the river on a regional basis, each of these states has preferred to go it alone on whatever portion of the river happens to lie within or along its borders. The result has been tragic, not only in the fact that such an approach is inefficient and uneconomical, but also and perhaps more important, because such action has the potential of precipitating war between Israel and the Arabs. For Israel is already diverting the head waters of the Jordan. The Arabs partly for purely economic reasons, but mostly for purposes of retaliation, have diverted, or are in the process of diverting, the sources of the Jordan, an action which could force Israel into attacking Arab installations and thus lead to war with the Arabs. Under such circumstances, a peaceful solution of the dispute is imperative.

Riparian State Water Plan Political Boundary Arab State Unify Plan
These keywords were added by machine and not by the authors. This process is experimental and the keywords may be updated as the learning algorithm improves.
This is a preview of subscription content, log in to check access.