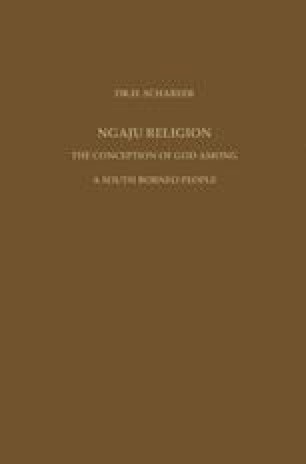 Natures and Manifestations of the Supreme Deities

Mahatala and Jata are two deities, distinct from each other, with their own habitations in the Upperworld and in the Underworld. They appear separately in numerous priestly ceremonies, and this also seems to be the case in the most important ritual, that in which the primeval act of creation is re-enacted. This event, so full of significance for the present, is introduced with the words: “When Ranying Mahatala Langit bends down from the Upperworld, and Tambon emerges from the primeval waters, then prosperity will be given to us.” But both deities appear precisely in these rites as one personal unity. The supreme deities form not only a duality, but they are also a unity, and this unity of the duality is prominent in all religious ceremonies. It is always the total divinity which is invoked and which takes an active part in events, either through its representatives or in person. This unity is shown very clearly in the creation myth. It is also demonstrated by the deities’ names. A distinction is made between the two names of the supreme deities, between the Hornbill (Upperworld) and the Watersnake (Underworld). But if both deities appear in a rite, then one speaks of Tambon haruei Bungai, i.e. the Watersnake which forms a unity with the Hornbill, the Watersnake which is also the Hornbill. The rite is thus accomplished by the snake/bird deity. Another name also illustrates this dualistic monism, viz.

Religious Ceremony Evil Spirit Dual Aspect High Spirit Creation Myth
These keywords were added by machine and not by the authors. This process is experimental and the keywords may be updated as the learning algorithm improves.
This is a preview of subscription content, log in to check access.