A Critical Survey of Studies on Dutch Colonial History 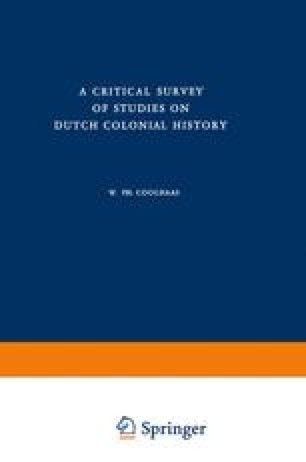 The Netherlands East Indies After 1795

When in 1795 the Netherlands came under French influence and the Stadholder went to England, this meant for Asia and South Africa that all the Dutch stations outside the East Indies Archipelago were lost, some at once for good (Ceylon), some at once and until 1802 and then again after the outbreak of war with England in 1803 and then for good (Cape Colony), some in this way until 1814 and then in March 1824 — the date of the concluding of the so-called Treaty of London — for good (the remaining possessions on the continent of India and Further India). What is of importance for the history of those lost possessions after 1795 has to a great extent already been mentioned; I can therefore concentrate more or less on what until 1950 was called The Netherlands East Indies. Because their colonial activities since 1795 were limited to the Malayan Archipelago, the concern of the Dutch with various parts of it increased greatly; they wanted to round off the territory, although for remote and economically unpromising districts this was not until after 1900.

Colonial Constitution Memorial Volume Military History Nationalist Movement Colonial Policy
These keywords were added by machine and not by the authors. This process is experimental and the keywords may be updated as the learning algorithm improves.
This is a preview of subscription content, log in to check access.