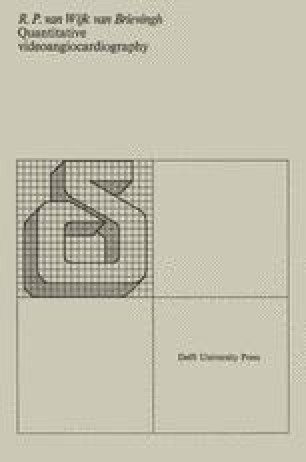 The X-ray Installation as a Part of the Measurement System

New techniques for the investigation of size and position of intracorporal organs without disturbance of the anatomic integrity of the subject became possible after the discovery of X-rays by ROENTGEN (1895). Only two years later, attempts were made to record the movements of internal organs by application of moving picture techniques, which by then were barely one decade old (MACINTYRE,1897). A method by which it was possible to record the image of the heart, free from distortion., from the fluoroscopic screen was described by MORITZ in 1900. The position of a vertically collimated X-ray beam was recorded on a drawing table by means of a mechanical construction which could be moved with respect to the patient. By moving the X-ray tube along the heart shadow’s border, a point-by-point registration of the undistorted heart contour was obtained (orthodiagraphy).

Spatial Frequency Modulation Transfer Function Image Intensifier Entrance Window Optical Transfer Function
These keywords were added by machine and not by the authors. This process is experimental and the keywords may be updated as the learning algorithm improves.
This is a preview of subscription content, log in to check access.