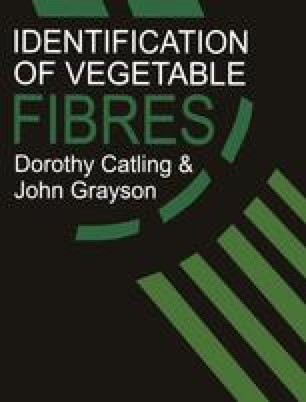 Boehmeria nivea is a member of the Urticaceae. Willis (revised 1966) records 45 genera for the family and 100 species for the genus. According to Kirby (1963), about twelve species of Boehmeria have been investigated as potential fibre crops, but none has gained the commercial importance of B. nivea. The specific name and the common name, white ramie, refer to the appearance of the abaxial surfaces of the leaves, which are closely covered by a woolly tomentum of unicellular hairs. There are many varieties of B. nivea. These vary in their habit, in the shapes of their leaves and in the colouring of their vegetative parts and of their flowers. They also vary in their response to soil conditions, climate and day length and in the quality and yield of the fibre which they produce.

Parenchyma Cell Fibre Cell Royal Botanic Garden Ramie Fibre Xylem Parenchyma
These keywords were added by machine and not by the authors. This process is experimental and the keywords may be updated as the learning algorithm improves.
This is a preview of subscription content, log in to check access.