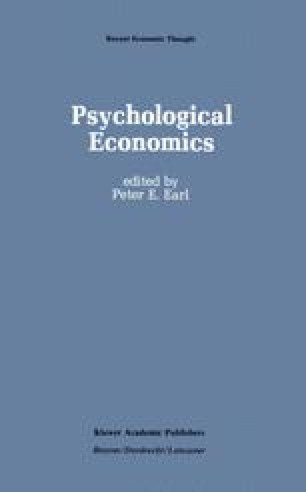 On Being a Psychological Economist and Winning the Games Economists Play

For the most part, this book has presented a methodologically-oriented analysis of the development of psychological economics, its tensions and its prospects. Such an orientation promotes the impression that the fate of psychological economics, or indeed any research program, depends essentially on a careful and generally dispassionate assessment of its prospective performance — an assessment heavily dependent on its performance in the past. One is encouraged to conceive of economists as single-minded and humble seekers after truth. In this final chapter the implications of a different line of argument are pursued: the central theme is that the fate of psychological economics is going to be shaped largely, or even — if one is thinking in lexicographic terms — decisively, by whether or not the kinds of research and teaching orientations that it entails are consistent with the career and lifestyle goals of potentially receptive academics. To anticipate how psychological economics may progress toward the year 2000, and to help in its progression, I intend to consider some aspects of the economics and psychology of being a psychological economist.

Psychological Economic Ideal Style Appointment Committee Academic Economist Heighten Appreciation
These keywords were added by machine and not by the authors. This process is experimental and the keywords may be updated as the learning algorithm improves.
This is a preview of subscription content, log in to check access.