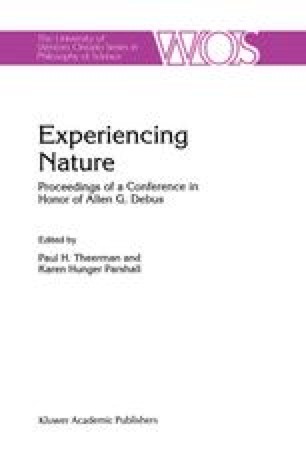 Nature and Culture in the Discourses of the Virtuosi of France

Nature, as the topics treated in this volume attest, embraces a wide range of issues. Even the most casual perusal of early modern texts suggests that nature functioned as the critical term defining the relationship of human beings to their world. But between the early modern view of nature and our own lies the intellectual chasm and historiographical minefield of the Scientific Revolution.1 The work of Allen Debus, 2 in particular, has shaken our faith in positivistic accounts of this development; extensive exposure to the virtues of Paracelsus, van Helmont, Robert Fludd, John Dee, etc. has made clear both that the transition from early modern to mechanical views of nature was less than clear-cut and that there was extensive and empirically-grounded opposition to a mechanical view of nature throughout the early modern period.3 Recent, more polemical studies have also attacked the Scientific Revolution as the source of an approach to nature which produced environmental disaster; that is to say, the mechanical philosophy is charged with condoning man’s rapacious exploitation of the earth’s natural resources.4 This negative reassessment of mechanical science is grounded in a fundamental distinction between nature and culture, where nature is primary and good, and culture is secondary, and, if not bad, at least suspect as artificial.

Seventeenth Century Scientific Revolution Mechanical View Perpetual Motion Mechanical Philosophy
These keywords were added by machine and not by the authors. This process is experimental and the keywords may be updated as the learning algorithm improves.
This is a preview of subscription content, log in to check access.

Cite this chapter as:
Wellman K. (1997) Nature and Culture in the Discourses of the Virtuosi of France. In: Theerman P.H., Parshall K.H. (eds) Experiencing Nature. The University of Western Ontario Series in Philosophy of Science (A Series of Books in Philosophy of Science, Methodology, Epistemology, Logic, History of Science, and Related Fields), vol 58. Springer, Dordrecht. https://doi.org/10.1007/978-94-011-5810-7_7