Management and Ecology of Freshwater Plants 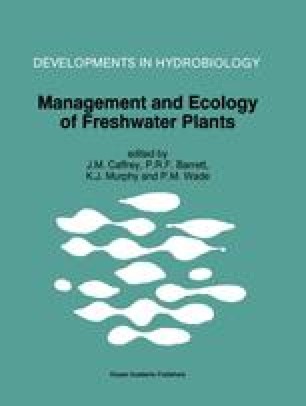 Management and Ecology of Freshwater Plants pp 241-245 | Cite as

The high resistance to control by herbicides of stands of the aggressively-invasive water plant Crassula helmsii (Australian swamp stone crop or New Zealand Pygmy Weed, also sold as Tillaea recurva) was shown during a series of tank and field trials aimed at: firstly, selecting the most appropriate UK-approved herbicide showed that diquat, either directly or in alginate form was effective on submerged plants particularly at low biomass, whereas for emergent stands, although glyphosate was initially selected as effective, diquat was subsequently recommended; secondly, the efficacy of the herbicides selected under a range of conditions of biomass, season of application and, particularly, field conditions showed that whilst low biomasses could be controlled and the plant could probably be eliminated, elevated or multiple applications would be necessary at the very high biomasses (up to 45 kg fresh weight per m2) achieved by this plant, unless the bulk of the biomass could be physically reduced prior to herbicide application; further trials were considered necessary to meet legal current constraints.