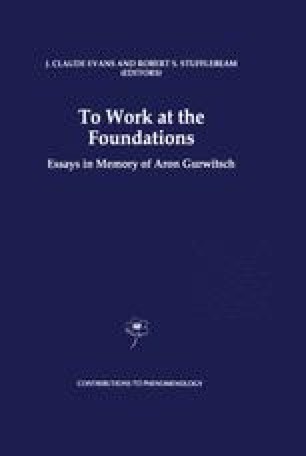 Gurwitsch’s Interpretation of Kant: Reflections of a Former Student

In Kants Theorie des Verstandes, we finally have the long awaited, definitive expression of Aron Gurwitsch’s interpretation of Kant’s theoretical philosophy.1 The broad outlines of this interpretation were presented in many seminars and lecture courses at the New School for Social Research, and important aspects of it are contained in his seminal study of Leibniz, as well as in the various versions of his article comparing the conceptions of consciousness of Kant and Husserl.2 But prior to the publication of this monograph, it was not available in toto and in detail. Thus, although the work contains few surprises for those of us fortunate enough to have been students of Professor Gurwitsch, its publication is none the less welcome, since it should facilitate the dissemination of this highly original and provocative reading of Kant to a wider philosophical public, including the world of Kant scholarship. It is as both a former student and a member of this latter world that I shall attempt to provide an account of this reading, assess its significance, and, as is only proper, offer some criticisms.

Innate Idea Husserlian Phenomenology Sentiment Animal Kantian Conception Transcendental Deduction
These keywords were added by machine and not by the authors. This process is experimental and the keywords may be updated as the learning algorithm improves.
This is a preview of subscription content, log in to check access.