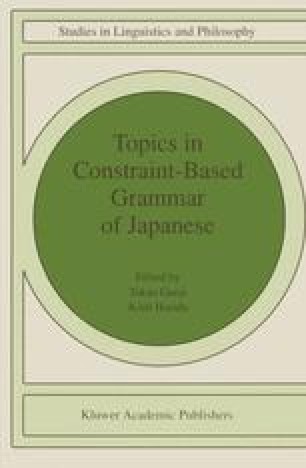 Chapter
Part of the Studies in Linguistics and Philosophy book series (SLAP, volume 68)

Many approaches have been pursued to implement constraint-based and/or feature-structure-based linguistic theories such as those discussed in this book. Those approaches include FUG (Kay 1985), PATR-II (Shieber 1986), and ALE (Carpenter 1992)1, among others. FUG and PATR-II, which were developed in the 1980s, mainly address unification of feature structures. ALE, developed in the early 1990s, does not just implement unification of feature structures but also addresses constraint-based computation on them. ALE is a constraint logic programming (CLP) language that treats typed feature structures as terms and processes constraints embedded in them.

Lexical Entry Horn Clause Head Noun Constraint Logic Programming Structural Principle
These keywords were added by machine and not by the authors. This process is experimental and the keywords may be updated as the learning algorithm improves.
This is a preview of subscription content, log in to check access.