Root Demographics and Their Efficiencies in Sustainable Agriculture, Grasslands and Forest Ecosystems 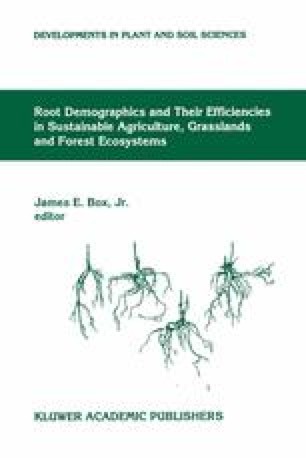 Root Demographics and Their Efficiencies in Sustainable Agriculture, Grasslands and Forest Ecosystems pp 345-356 | Cite as

The relationships between the depth and biomass of root systems and the shoot growth of plants for 18 farm crops and three weeds in Northern China were observed for two years continuously (1987-1988). The root systems of all crops and weeds were distributed in a soil layer range of 40 cm to 300 cm. The depth of the root system of sesame (Sesamum indicum L.) was the most shallow, while hemp (Cannabis sativa L.) was the deepest. Generally, crops with tall stems developed comparatively deeper root systems, but some dwarf crops also developed deeper root systems, such as sugarbeet (Beta vulgaris L.), peanut (Arachis hypogaea L.) and wheat (Triticum aestivum L.). Generally, crops with short growing periods, tolerance for poor soil, and characteristics adapted for a cool environment developed shallow root systems. The depths of root systems were not related to crop types; different root depths existed within all types. The average ratio of root depth and shoot height (R/S.T) of the 18 crops was 2.27, and the average ratio of shoot to root biomass (S/R) was 7.25. The root vertical distribution followed the index reduction model Y = Ae-bx, but b was different in different crops. The three weeds observed all developed deeper root systems and greater biomass than the crops.