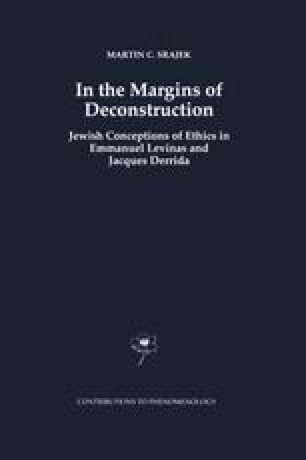 We have many times alluded to that which the apocalypse circumscribes. It is that which is to be unveiled, the event from which we must perforce always perceive ourselves to be in exilic distance. Yet, although that distance is there, and although it is infinite and can never be positively overcome, it remains a stretch, i.e., a tone, produced, as we will see in this chapter, through its attachedness to an infinite origin and an infinite end. A tone is a differential phenomenon and as such it is also an apocalyptic one. The tone is another way to talk about Derrida’s most original concept, i.e., différance. This concept is tied to an understanding of God as an infinite goal and infinite origin, not unlike the concept of God as the asymptotic limit in Cohen’s philosophy. We will see that Derrida’s epistemology of the infinite task is only a stepping-stone for an ethics of the infinite task. The task is conceived within the ‘bracket’ of an end and an origin, a telos and an arche that is divine; the bracket is God. This, again, is the prevenient structure that out of a deep past announces a remote future. Prévenance is what named (he connection between the trace of ethics and redemption. It nourishes the human community so that it can progress towards this telos and come increasingly closer without, however, coinciding with this telos at any time. It remains infinitely removed, and humanity thus remains stretched out towards it infinitely.

Infinite Distance Negative Attribution Transcendental Condition Negative Theology Infinitesimal Distance
These keywords were added by machine and not by the authors. This process is experimental and the keywords may be updated as the learning algorithm improves.
This is a preview of subscription content, log in to check access.