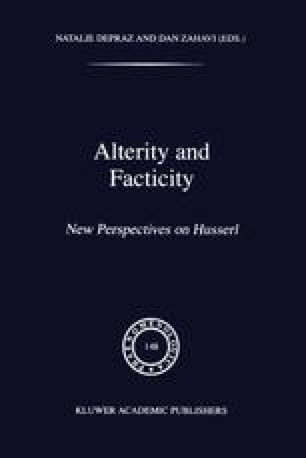 It is well known that transcendental phenomenology has nothing in common with the kinds of particularism (racism, antisemitism, nationalism…) which have devastated Europe during, at least, the first decades of our century. Husserl himself seems to have been especially lucid, unlike some of his masters and a few dissenting disciples. Barry Smith notes that “unlike Meinong and Frege he was not an antisemite”2. James G. Hart approbates: Husserl “is not a racist” and according to him “each people can be a ray of the divine light and divine idea”3. In the same way we could dwell on the fact that Husserl was no nationalist4: “his strong theoretical proclivities kept him out of the nationalistic maelstrom that devoured many of his contemporaries”5. This might be true not only concerning Husserl’s behaviour and state of mind during the nazi period, but also during the First World War. After the war, Husserl was proud not to have believed he could become in a Fichtean way a guide on the road to “the blessed life” 6. What did dissuade him from taking part in the war propaganda ? If he “never wrote any war text” (Kriegsschrift). 7 it was, on one hand, because of an almost supernatural premonition: “my daimonion warned me”8, Husserl says, like a new Socrates. On the other hand, there is an explanation for his prudent abstention from nationalistic involvement: Husserl did remain conscious of his duty as a promoter of philosophy as a rigorous science; either in peace or during the war, Husserl aims to live “resolutely and purely as a scientific philosopher”9.

Rigorous Science Transcendental Phenomenology German People German Soldier Nationalistic Maelstrom
These keywords were added by machine and not by the authors. This process is experimental and the keywords may be updated as the learning algorithm improves.