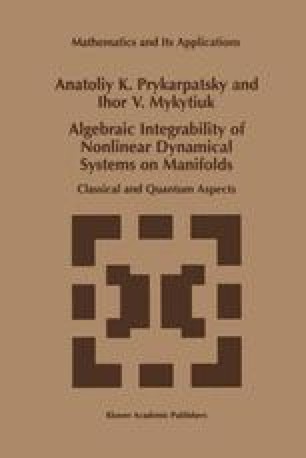 Chapter
Part of the Mathematics and Its Applications book series (MAIA, volume 443)

During the last two decades, the use of differential geometric methods in physics has undergone a steady increase. Perhaps the most extensive application has been in the symplectic formulation of classical mechanics and in the problem of quantization. The resulting geometric quantization is an outgrowth of work by Souriau (1970) and Kostant (1970). The subject is still evolving, and the most recent and comprehensive treatments are to be found in (Woodhouse, 1980), (Guillemin et al, 1977), Sniatycki(1980, 1983), (Sniatycki et al., 1983), Kostant et al.(1970, 1987), (Gawedzki, 1976), Rawnsley(1977, 1978, 1979a, 1979b), (Rawnsley et al., 1989), Gotay(1993, 1986), (Gotay et al., 1978), (Gotay et al., 1981), Tuynmann (1986, 1988, 1990), (Duval et al., 1990), Czyz(1977, 1979), Puta(1984, 1993) and others. In this chapter we consider only the classical Kostant-Souriau geometric quantization without any modification for which are devoted many papers. The Hilbert space constructed by KS geometric quantization consists of F-horizontal sections of some line bundle; i.e., sections which are covariantly constant along vector fields in the invariant complex polarization F. But it often turns out that this line bundle may not have any smooth global F-horizontal sections, and then the construction of the Hilbert space via the standard KS procedure becomes impossible.

Vector Field Line Bundle Parallel Transport Holomorphic Section Holonomy Group
These keywords were added by machine and not by the authors. This process is experimental and the keywords may be updated as the learning algorithm improves.
This is a preview of subscription content, log in to check access.