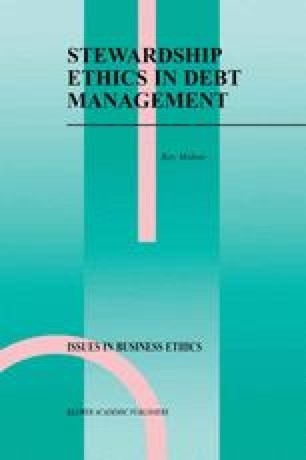 The Context of Stewardship: The Debt Problem

Usury has had a long history. It appears in the Old Testament as an important social issue. Understanding usury as exorbitant interest can cloud the subject. This was not necessarily the Hebrew usage, although the word neh’-she’ch (or neshekh) has its basis in the verb “to bite”.[l] This etymology perhaps implies a method of imposing interest in advance so that the borrower agreed to pay back a sum greater than the amount advanced. [2] In Psalm 109, the term nah-shah is used with the flavour of extortion [3], but the fundamental idea of the word is “giving time for payment”. We should not, therefore, approach the usury debate with the preconception that the Old Testament is negative towards interest in itself. The situation is more complex. Things which may be perfectly legitimate in themselves can become unacceptable as a result of circumstances or extremes. The taking of interest was legitimate in the case of the stranger. [4] It was not, however, permitted to charge interest to an Israelite brother.[5] Nehemiah considered it reprehensible that the rulers should take advantage of their poor brethren by way of interest. [6] Their responsibility was to help without expectation of personal gain. [7] Although the Old Testament does not condemn interest in itself, it is not complacent about debt and its dangers. This is consistent with New Testament teaching. Although in the epistles the word opheilo predominantly emphasizes the positive sense of responsibility that arises in consequence of belonging to Christ, in the Gospels it has, in the main, the negative meaning of being in debt with the obligation and uncomfortable consequences involved.[8] Debt is best avoided but usury can be mentioned without negative connotations.[9]

Interest Rate Business Ethic Credit Card Market Rate Consumer Credit
These keywords were added by machine and not by the authors. This process is experimental and the keywords may be updated as the learning algorithm improves.
This is a preview of subscription content, log in to check access.