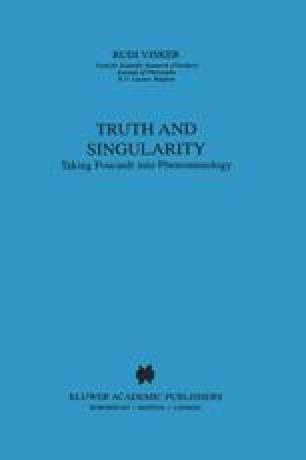 Meaning and Validity Habermas on Heidegger and Foucault

Meaning, Habermas warns us, should not be allowed to consume validity. For once we let meaning exhaust validity, the further exhaustion of the project of modernity and the loss of its normative content are bound to follow, as becomes clear from the writings of those Habermas calls “the theorists of the counter-enlightment”, — an epithet wide enough to include authors as diverse as Heidegger, Nietzsche and Foucault. One way or another these philosophers are all undoing the intrinsic connection between meaning and validity and, we are told, the political mésalliance of some of them only goes to show how catastrophic indeed the replacement of critical theory’s commitment to “the philosophical discourse of modernity” by some blend of post-modernism and post-structuralism is bound to be. For, according to Habermas, only a theory that respects the internal relation between meaning and validity, without at the same time eliminating the difference between the two, only such a theory can be entrusted with the delicate task of defending the legacy of modernity, whilst retaining a critical perspective on the way it is materialized in society. And Habermas is sufficiently confident in the results of his Theory of Communicative Action to claim the title for his own theory and to counterpose it to a host of other attempts which are, successively, shown to be mistaken or to have missed the opportunity of taking “the alternative paths” (PDM 295) implicit in their own problematics.

Philosophical Discourse Internal Connection Validity Claim Reciprocal Causality Core Proposition
These keywords were added by machine and not by the authors. This process is experimental and the keywords may be updated as the learning algorithm improves.
This is a preview of subscription content, log in to check access.