The Turning Points of the New Phenomenological Era 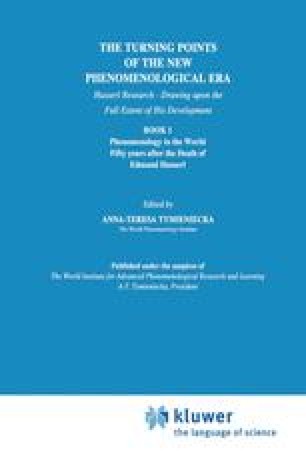 Husserl and the Anthropological Vocation of Phenomenology

It is possible to show that there is neither a philosophy of Nature nor a philosophy of man in Husserl’s thought. However paradoxical this may seem, we shall see that to a certain extent phenomenology itself had initiated the general movement that has led philosophical research away from the question of “man” toward a radical critique of humanism and anthropologism. This movement, both praised and denounced years later, brought on the “anthropological interpretation” of Husserl’s phenomenology which was to provide French phenomenological thought with its best conceptual resources. Yet this reading of Husserl was a complete misreading, possibly the most serious misinterpretation ever made in the field of phenomenology. (See J. Derrida, “Les Fins de l’Homme,” in Marges de la Philosophie, pp. 131–164, esp. p. 139.)

Transcendental Phenomenology Positive Science Philosophical Anthropology Pure Consciousness Husserlian Phenomenology
These keywords were added by machine and not by the authors. This process is experimental and the keywords may be updated as the learning algorithm improves.
This is a preview of subscription content, log in to check access.

Cite this chapter as:
Kelkel A.L. (1991) Husserl and the Anthropological Vocation of Phenomenology. In: Tymieniecka AT. (eds) The Turning Points of the New Phenomenological Era. Analecta Husserliana (The Yearbook of Phenomenological Research), vol 34. Springer, Dordrecht. https://doi.org/10.1007/978-94-011-3464-4_3