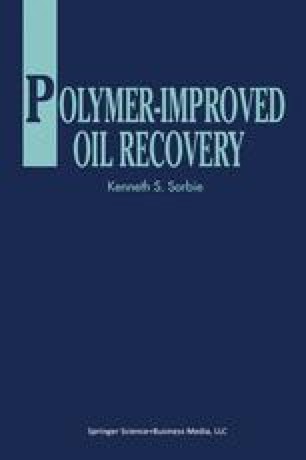 In the very early days of the oil industry, the general practice in land-based shallow reservoirs was to produce oil by primary depletion. In this method, the compressional energy of the reservoir was used to force oil to the producer wells, with a consequent drop in the reservoir pressure. However, it was recognised that reservoirs would ultimately drop below the bubble point pressure, such that dissolved gas would be released from the oil. As a result of the appearance of this extra phase, production impairment would occur. In order to maintain reservoir pressure and also to sweep out oil in a more efficient displacement process, waterflooding became the standard practice in many reservoir formations. An intense period of both field application and laboratory and theoretical research on waterflooding then followed. The main pre-eminence of waterflooding came to the fore in the 1950s and, during this period, the principal strengths and weaknesses of the methods were quite well established. In particular, the inefficiency of the waterflood oil displacement mechanism as a result of either an unfavourable mobility ratio or heterogeneity was largely identified. The general subject of waterflooding has been reviewed in some detail by Craig (1971) and Willhite (1986).

Capillary Number Bubble Point Pressure Mobility Ratio Polymer Flooding Channel Sand
These keywords were added by machine and not by the authors. This process is experimental and the keywords may be updated as the learning algorithm improves.
This is a preview of subscription content, log in to check access.