Minimax Models in the Theory of Numerical Methods 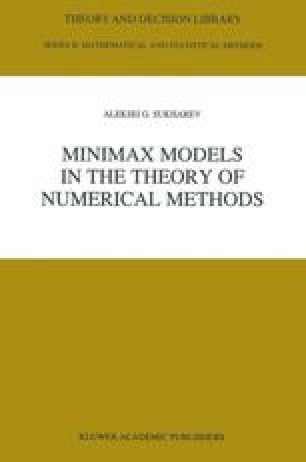 In this chapter, we discuss the main elements of all the subsequent constructions: functional or operator to be approximated corresponding to the problem being solved; dass of algorithms that can be used to solve the problem; criterion far estimating efficiency of algorithms; general concept of optimality; and, finally, specific notion of algorithm’s optimality in the framework of the adopted setting. Combination of all these elements forms the so-called computation model. We obtain some general results which enable us to solve certain principle methodologial problems and are frequently used in the further constructions.

Optimal Algorithm Functional Class Adaptive Algorithm Global Optimization Problem Stochastic Algorithm
These keywords were added by machine and not by the authors. This process is experimental and the keywords may be updated as the learning algorithm improves.
This is a preview of subscription content, log in to check access.