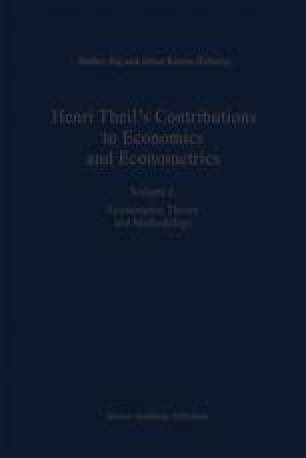 In simple though approximate terms, the two-stage least squares method of estimating a structural equation consists of two steps, the first of which serves to estimate the moment matrix of the reduced-form disturbances and the second to estimate the coefficients of one single structural equation after its jointly dependent variables are “purified” by means of the moment matrix just mentioned. The three-stage least squares method, which is developed in this paper, goes one step further by using the two-stage least squares estimated moment matrix of the structural disturbances to estimate all coefficients of the entire system simultaneously. The method has full-information characteristics to the extent that, if the moment matrix of the structural disturbances is not diagonal (that is, if the structural disturbances have nonzero “contemporaneous” covariances), the estimation of the coefficients of any identifiable equation gains in efficiency as soon as there are other equations that are over-identified. Further, the method can take account of restrictions on parameters in different structural equations. And it is very simple computationally, apart from the inversion of one big matrix.

Moment Matrix Wage Bill Asymptotic Covariance Matrix Structural Disturbance Disturbance Vector
These keywords were added by machine and not by the authors. This process is experimental and the keywords may be updated as the learning algorithm improves.

This article first appeared in Econometrica, 30 (1962), 54-78. Reprinted with the permission of The Econometric Society.