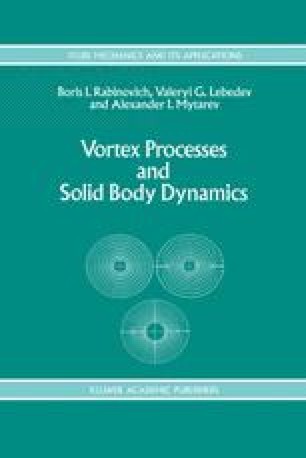 Some Dynamics Problems for Systems with Electromagnetic Actuators

Chapter
Part of the Fluid Mechanics and its Applications book series (FMIA, volume 25)

In Chapter 1 we presented the mathematical model of eddy currents in HECF elements (Article 1.3), obtained within the scope of assumptions and constraints that, on one hand, make it possible to obtain a rigorous mathematical solution of the stated problem, and on the other hand, they result from specific features of application of AES and SC magnetic orientation and stabilization systems as well as electromagnetic levitation systems. In Chapter 4 devoted to experimental verification of the considered vortex models we showed by the example of the electromagnet being the principal element of the levitation system, that, by its structure, the suggested mathematical model allows a generalization for the cases of leakage flux existence, finite magnetic permeability of the core material and saturation effects. In that chapter the adequacy of skin effect mathematical model is corroborated, and it is shown that, for typical values of the electromagnetic levitation system parameters, the identification of the electromagnet with HECF core as an object of control can be performed with an accuracy sufficient for engineering calculations only taking into account eddy currents. Thus, eddy currents are in this case the ‘principle’ that determines appearance and disappearance of subtle dynamic effects in the closed-loop electromagnet — controller system for both steady-state oscillations and transient processes.

Eddy Current Stability Margin Stability Domain Integrodifferential Equation Harmonic Balance Method
These keywords were added by machine and not by the authors. This process is experimental and the keywords may be updated as the learning algorithm improves.

However, true it may be that every generation and destruction proceeds from some principle, or even more than one, why does this happen and what is the cause?