The Asian City: Processes of Development, Characteristics and Planning 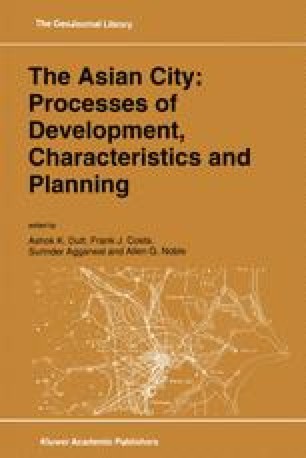 The Asian City: Processes of Development, Characteristics and Planning pp 145-158 | Cite as

A high degree of urbanization exists in India today. This is due to the colonial base and subsequent haphazard growth after independence which gave birth to a peculiar disorder of urban spaces and development. Peopling of growing urban areas could not be planned; rather, all new developments which occurred were merely aligned to the old systems. In trying to understand India’s overall urbanization system, one may note that there is a total of 300 towns and urban agglomerations with over 100,000 people. China is the only other Asian nation to have more such cities. All other Asian countries, although having acute urban problems, have a considerably lower number of urban centers with this many people.

Urban Population Urban Growth Urban Space Urban Agglomeration Urbanization Level
These keywords were added by machine and not by the authors. This process is experimental and the keywords may be updated as the learning algorithm improves.
This is a preview of subscription content, log in to check access.