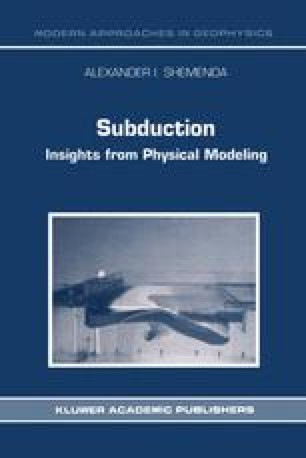 The main difference between mechanics of the classical subduction of oceanic lithosphere and the subduction (consumption) of continental lithosphere in the collision zones beneath either continental or oceanic lithosphere, is defined by the presence of a thick continental crust in the latter case. High buoyancy of the crust prevents it from being pushed or dragged down deep into the mantle. The general picture of the continental lithosphere subduction (continental subduction [Mattauer1986]) seems to depend first of all on two major factors; the effective strength of the crust and the coupling between the crust and the mantle layer of the lithosphere. If both the strength and the coupling are high enough, one can expect the style of subduction to be similar to that shown in Figure 4.3 or Figure 4.4 (experiments on subduction of a low density lithosphere). If the effective strength of the crust is too low, then independently of the coupling between the crust and mantle, the crust would not be dragged down to a large depth, but be scraped off the mantle layer of the plate. The result would be the formation of a huge crustal accretionary prism, or orogen, similar to but much larger than sedimentary prisms in classical oceanic subduction zones. A more complicated and probably realistic situation corresponds to the case of comparatively strong crust (at least the upper crust) and a low coupling with the mantle. The low coupling may be due to the presence of a weak ductile layer, or “crustal asthenosphere”, in the lower crust [Ranally and Murphy1987]. In this chapter we present results of a simple modeling of continental subduction with the lithosphere comprising “crustal asthenosphere”.

Oceanic Lithosphere Continental Lithosphere Yield Limit Collision Zone Crustal Layer
These keywords were added by machine and not by the authors. This process is experimental and the keywords may be updated as the learning algorithm improves.
This is a preview of subscription content, log in to check access.