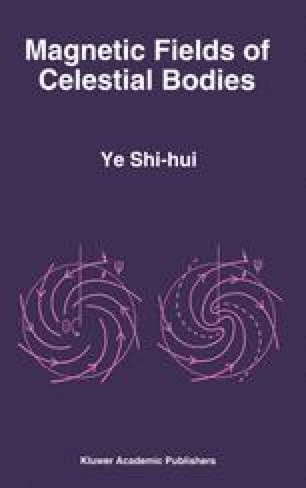 Magnetic Fields of the Solar System

In the preceding four chapters we have presented a comprehensive and overall description of the solar magnetic field. This chapter will be devoted to the magnetic fields of the other celestial bodies in the solar system as well as of interplanetary space. Just like the overwhelming superiority of its mass, the Sun’s magnetic field also occupies a dominant position in the solar system. Due to the action of the solar wind, this field extends outward from the solar atmosphere, permeates the vast space of almost the whole solar system, and affects the magnetic fields of planets and their satellites. Since the beginning of the space era it has become possible to carry out in situ exploration of planetary and lunar magnetism. Although work in this field is still in its infancy, some exciting achievements have been obtained in recent years.

Magnetic Field Solar Wind Interplanetary Magnetic Field Lunar Surface Solar Wind Velocity
These keywords were added by machine and not by the authors. This process is experimental and the keywords may be updated as the learning algorithm improves.

The interplanetary electromagnetic conditions control the phenomena near the Earth and are responsible for the production of magnetic storms and aurorae. They also produce intensity variations in cosmic radiation, and may play a role for the generation of cosmic radiation. H. Alfvén and C.-G. Fälthammar, Cosmical Electrodynamics (1963).