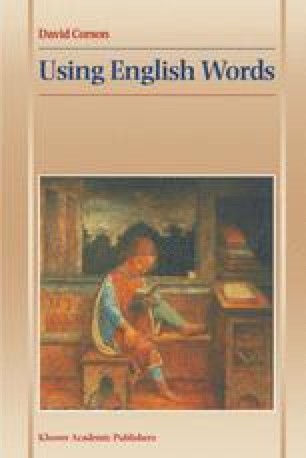 The Historical Development of the Lexical Bar

This chapter examines the introduction of G-L words into English. It identifies the sociohistorical events that have positioned some social groups at a distance in their discursive practices from specialist and learned words. The events distancing G-L words in this way get special treatment, since they stand out in an historical analysis. They are mostly to do with the development in Britain of a rather exclusive culture of literacy and its associated meaning systems: a culture that spread later to newly founded or colonized English-speaking countries. This culture of literacy became institutionalized in formal education where high value was placed on the daily use of Latin for all spoken purposes and on the rigorous study of Greek. It then became the basis for an enlarged English vocabulary drawn from those languages. This process excluded the many, who received no education, from the new vocabularies of the few who did. The many continued to use a very Germanic vocabulary which became less and less central to the formal expression of the meaning systems of the literate culture.

English Word Mother Tongue Fifteenth Century Discursive Practice Literate Culture
These keywords were added by machine and not by the authors. This process is experimental and the keywords may be updated as the learning algorithm improves.
This is a preview of subscription content, log in to check access.