The Christianization of Pyrrhonism 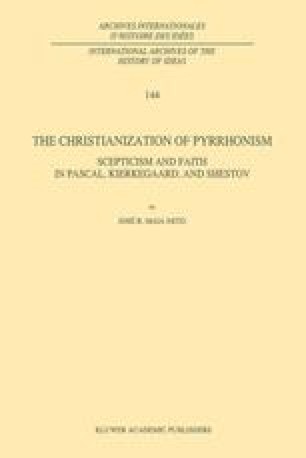 The Christianization of Pyrrhonism pp 37-64 | Cite as

The dialogue between Pascal and the Jansenist La Maistre de Sacy recorded by Sacy’s secretary, Fontaine, “is of an exceptional quality” (Gounelle 1966: 19). The positions of Epictetus and Montaigne are brilliantly summarized, compared, and evaluated in the Conversation. In no other place is Pascal’s view of the relation of philosophy to Christianity so clearly stated. As for the origin of the text, most scholars agree that Fontaine used a draft or outline written by Pascal. As for Sacy’s interventions, Pierre Courcelle thinks Fontaine based his text on written responses by Sacy (Coucelle 1960), whereas Henri Gouhier (1966: 67–125) and Jean Mesnard [Pascal, OC, III, 109–110] believe it more likely that Sacy’s secretary expanded notes that Sacy may have written on the margins of Pascal’s draft. Whatever the case, the main thing is that no scholar I am aware of doubts that Pascal and Sacy held the views dramatically presented by Fontaine in the Conversation. Scholars disagree only concerning whether the conversations actually took place as Fontaine claims, or were just an exchange of letters.

Fall State Christian Doctrine Intellectual Integrity Intuitive Principle Spiritual Director
These keywords were added by machine and not by the authors. This process is experimental and the keywords may be updated as the learning algorithm improves.
This is a preview of subscription content, log in to check access.