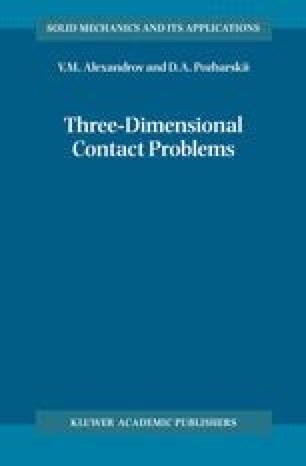 Chapter
Part of the Solid Mechanics and Its Applications book series (SMIA, volume 93)

In this book we are concerned with contact problems within the classical (linear, infinitesimal) theory of elasticity. The theory of elasticity has a long history, stretching back to Galileo and Hooke. The history of Western European research up to the 1890’s is detailed in Todhunter and Pearson (1893). This historical account is extended to the 1920’s by Love’s (1927) Treatise on The Mathematical Theory of Elasticity. He gives not only the history, but also the foundation of the theory, and its detailed application to a vast variety of problems. Love’s analysis is built in large part on the work of Boussinesq (1885) and Cerruti (1882), it also draws on the work of mathematical physicists such as Lamb, Lord Rayleigh and Lord Kelvin; for the contact problems, it is based on the work of Hertz (1882). It is universally recognised that Hertz was far ahead of his time. His beautiful analysis of the contact between two elastic bodies remains to-day as the most important and far reaching example of a solution of a classical problem in elasticity theory. It is still the basis for many tests, and is used in situations which are far removed from the one originally considered by Hertz, for instance in the analysis of the contact between a wheel and a rail.