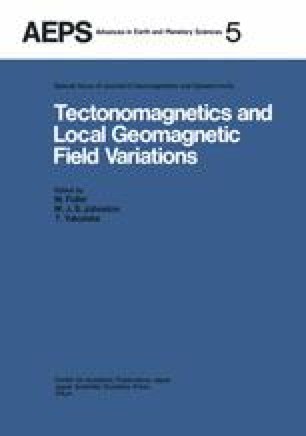 Polycrystalline magnetite and rock samples have been subjected to uniaxial compression and stress cycling at room temperature. The changes in the components of remanent magnetization were recorded continuously as a function of stress, and the changes in direction and total intensity of magnetization were inferred. Different types of response were recognized, according to the type of magnetization the sample was carrying, i.e., high field or weak field remanence. The anomalous increase of weak field remanence previously reported, appears partly reversible under stress cycling. However, the changes in the lowest stress range are irreversible and reduce the zero stress magnetization from cycle to cycle. Reversible rotations of the magnetization vector of as much as 180° were observed during each half cycle and were primarily due to changes in the sign of the component of magnetization parallel to compression. An andesite whose magnetic phases are single domain according to hysteresis criteria showed a much smaller effect regardless of the type of magnetization it carried. These results again draw attention to the variety of stress responses and the importance of three component observations in field attempts to detect seismomagnetic precursors.

Remanent Magnetization Magnetization Vector Stress Range Stress Cycling Uniaxial Stress
These keywords were added by machine and not by the authors. This process is experimental and the keywords may be updated as the learning algorithm improves.
This is a preview of subscription content, log in to check access.