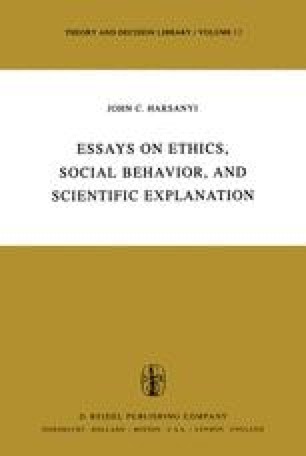 Apart from economic payoffs, social status (social rank) seems to be the most important incentive and motivating force of social behavior. This concern for social status is perhaps more conspicuous in those societies, like the American, where the ruling ideology encourages a striving for upward social mobility, for movement to higher social status positions. But it seems to be no less important in those societies, like the traditional Indian caste society, which prevent or strongly discourage upward mobility—for at least downward mobility is possible in every society as punishment for nonfulfillment or certain social obligations. Thus the only difference is that in such less mobile societies, people’s concern for social status will take the form of simply trying to maintain their existing status and caste positions and of avoiding all types of nonconformist behavior possibly endangering these positions.

Social Status Social Group Deferential Behavior Bargaining Model High Social Status
These keywords were added by machine and not by the authors. This process is experimental and the keywords may be updated as the learning algorithm improves.

The original version of this paper was presented at the Annual Meeting of the American Political Science Association in Chicago, September, 1964. It was distributed as Working Paper No. 94 of the Center for Research in Management Science, University of California, Berkeley.

I have been very gratified to find that—on the basis of very extensive empirical research, and without any reliance on game-theoretical considerations—Peter M. Blau (1964) has arrived at a theory of social status very similar to the theory proposed in this paper, which is based on a game-theoretical bargaining model.

The research reported in this paper was partially supported by a grant from the Ford Foundation to the Graduate School of Business Administration, University of California, Berkeley.

Cite this chapter as:
Harsanyi J.C. (1980) A Bargaining Model for Social Status in Informal Groups and Formal Organizations. In: Essays on Ethics, Social Behavior, and Scientific Explanation. Theory and Decision Library (An International Series in the Philosophy and Methodology of the Social and Behavioral Sciences), vol 12. Springer, Dordrecht. https://doi.org/10.1007/978-94-010-9327-9_11