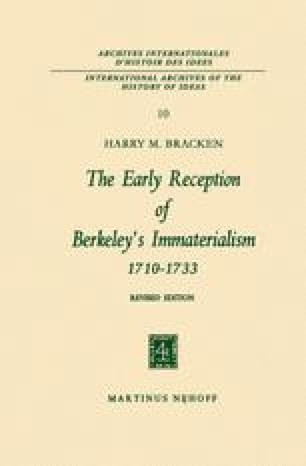 The Early Reception Of Berkeley’s Immaterialism

’Tis incredible what prejudices can work on the best geniuses, nay and even on the lovers of novelty, for I did but name the subject matter of your book to some ingenious friends of mine and they immediately treated it with ridicule, at the same time refusing to read it … A physician … undertook to describe your person, and argued you must needs be mad, and that you ought to take remedies. A Bishop pitied you that a desire and vanity of starting something new should put you on such an undertaking, and when I justified you in that part of your character, and added the other deserving qualities you have, he said he could not tell what to think of you.1

Eighteenth Century Early Reception Secondary Quality Italian Translation Universal Reason
These keywords were added by machine and not by the authors. This process is experimental and the keywords may be updated as the learning algorithm improves.
This is a preview of subscription content, log in to check access.