The Works of Jacques-Auguste de Thou 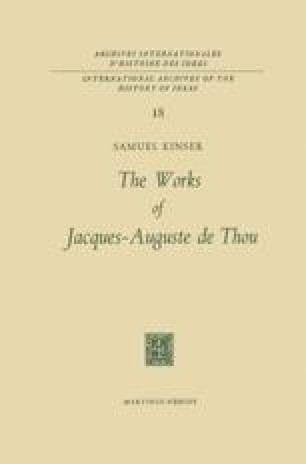 De Thou’s works form an integrated whole. His poetry not only introduces the reader to a circle of friends and a body of interests which make less surprising the remarkable number of obituary notices in the History, a series of biographies so extensive that they form a kind of cultural history of later sixteenth-century Europe1; the poems also throw light on the religious, political, and historiographical views which inform the History of His Time. And if de Thou’s poems were often occasioned by what happened in or to his History, the Memoirs were written specifically as a defense of that work. In addition to information on the historian’s early studies and the manner in which he regarded his critics, the Memoirs contain materials which supplement the History itself in questions of contemporary politics and letters.2 The relevance to de Thou’s historiography of the various historical and biographical works included in the third section of this chapter, “Other Published Writings,” is obvious in most cases from their very titles.

French Translation Variant Reading Paris Translation Latin Text Original Draft
These keywords were added by machine and not by the authors. This process is experimental and the keywords may be updated as the learning algorithm improves.
This is a preview of subscription content, log in to check access.