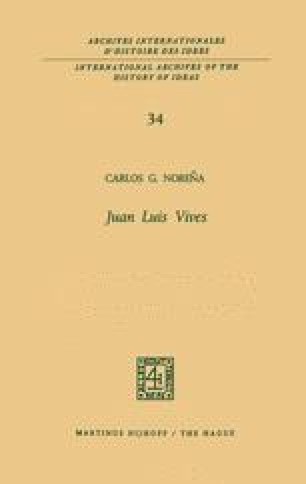 In the Steps of Erasmus and Beyond

The second half of this book deals with the thought of Juan Luis Vives. Our task is not an easy one, partly because of the encyclopedic wealth of Vives’ ideas, and partly because they are unsystematic, complex, and sometimes even nebulous and contradictory. Another major difficulty in grasping the originality and individuality of Vives’ thought is the fact that both his name and his work have been unduly overshadowed by the still glamorous figure of Erasmus of Rotterdam. Scholars with a mediocre knowledge of Vives’ intellectual life have not hesitated to characterize Vives simply as a disciple of Erasmus, if not as a full member of the Erasmian movement in Spain, at least as a loyal representative of the Erasmian circle in the Netherlands and England. My contention is that such characterization is unfair to Vives. Therefore, in this chapter I shall review the personal relations between the two men as the best means to qualify the extent and the limitations of Erasmus’ influence upon Vives’ thought. This chapter will also be a convenient link between the narrative of Vives’ life and the description of his intellectual achievements.

Religious Life Henry VIII Biblical Criticism Charles Versus Moral Reform
These keywords were added by machine and not by the authors. This process is experimental and the keywords may be updated as the learning algorithm improves.