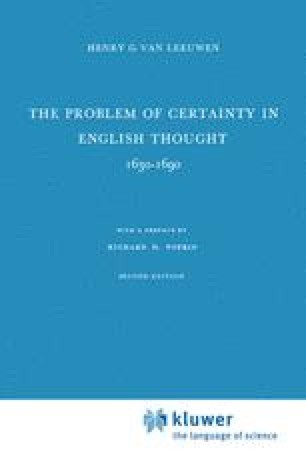 John Locke and the Philosophical Exposition of the Theory of Certainty

In the writings of John Locke (1632–1704), particularly his An Essay concerning Human Understanding,1 a generalized version of the theory of certainty we have been examining finds expression. It occurs not by way of preface to some major work as was often the case in Boyle, nor as a set of statements which almost accidentally find their way into a major scientific treatise as in the case of Newton, but as the major theme of the work itself. His formulation is not specifically intended as a basis for a polemic against Catholicism or atheism as in the writings of Chillingworth and Tillotson, nor as a foundation for natural theology as in the case of Wilkins, nor again as the basis for scientific knowledge as in the cases of Glanvill and Boyle. Though it may have been occasioned by one of these interests, the theory is intended as a descriptive account of what goes on in the mind when knowledge, belief, or error occurs. He describes the difficulties in the way of knowledge caused by the fallibility of the senses, the weakness of the understanding, and the complexity of nature. The exposition of these problems and their solution, based upon an appeal to the certainty of ordinary life and the doctrine of levels of certainty, is the major purpose of the Essay.

Journal Entry Absolute Certainty Descriptive Account Secondary Quality Intuitive Knowledge
These keywords were added by machine and not by the authors. This process is experimental and the keywords may be updated as the learning algorithm improves.
This is a preview of subscription content, log in to check access.