Seismicity of the European Area 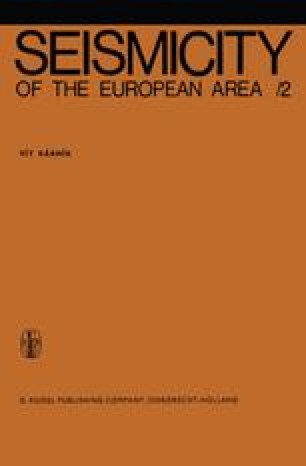 Certain coastal regions of the Mediterranean Sea and of the Atlantic belonging to our area under investigation are endangered by tsunamis. From the whole area only some rather self-contained regions are subject systematically to the effects of seismic sea-waves. The most prominent regions are the Aegean and Adriatic coasts, the Ionian sea coasts, and the Eastern Mediterranean coast of North Africa and Portugal. On the Eastern Mediterranean coast the following regions are subject to tsunamis: a) the Gulf of Corinth, b) the Euboean Gulf, c) the area between Himara an Durrës, d) the Sea of Marmara, e) the area between Cyprus, Jubeil and Acre, f) the area between Khíos and Izmir and g) the south of the Greek Archipelago. It is very probable that the generation of tsunami cannot be attributed to a specific and single mechanism. We can give several reasons for the origin, e. g. submarine tectonic movements of the ocean bottom, land-slides, volcanic eruptions, resonance in ocean trenches, etc. A certain mechanism may prevail in specific regions but a closer study has not yet been made.

Tropical Cyclone Ocean Bottom Light Structure European Area Tide Gauge Record
These keywords were added by machine and not by the authors. This process is experimental and the keywords may be updated as the learning algorithm improves.
This is a preview of subscription content, log in to check access.