The Problem of Embodiment 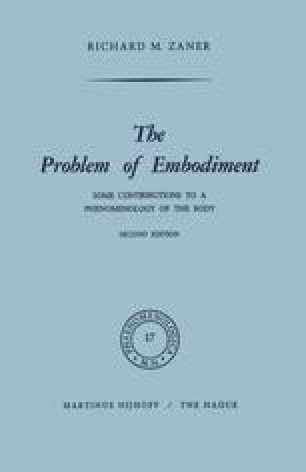 The Theory of the Body-Qua-Mine as Mystery

The quest for an “existential indubitable,” we have seen, locates one, to be sure, but it is an indubitable of a very strange type: while the explosive “j’existe!” (or: “je suis manifeste,” “es erlebt in mir”) bursts forth with unmistakable energy, it yet presents itself as fundamentally opaque. Being me myself as embodied by this body which is mine, I am unable to put it over against me; reflectively observing it, on the other hand, I only make thematic that very unity itself, with its intrinsic opacity. What does it mean for this physical organism to be mine? Do I “have” it like a triangle “has” three angles? Or is there some other sense to the “mine” here? Am I my body? Or, is it rather the case that “I” and “my body” are, not self-identical, but in some way “unified?” If they are not the same, but are unified, what kind of unity is it that combines this physical “stuff” with what is absolutely opposite to “stuff,” namely, “me,” or “mind?”

Internal Perception Instrumental Relation Deep Community Telegraph Pole Animate Organism
These keywords were added by machine and not by the authors. This process is experimental and the keywords may be updated as the learning algorithm improves.
This is a preview of subscription content, log in to check access.