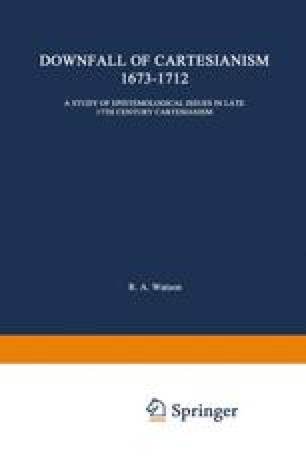 Malebranche gave up the notion that interaction occurred between mind and body. Like Foucher, numerous Cartesians thought that this interaction was obvious and thus retained it in their expositions of Cartesianism. These philosophers who do not offer occasionalist solutions to Cartesian problems are referred to as orthodox Cartesians, though there is no insistence upon the term, orthodox. As a matter of fact, these philosophers did consider themselves to be orthodox expositors of Cartesianism in contrast to someone like Malebranche who went so far as to assert that he was not a strict Cartesian. However, the orthodox Cartesians could not retain all the principles which seemed to underlie Cartesianism. They retained the strict dualism between mind and matter, and thus could explain interaction only by dispensing with the causal likeness principle. Concurrently, in order to contend that mind could know matter which was utterly different from it, they also had to deny the epistemological likeness principle.

Material Object Causal Interaction Material Thing Secondary Quality Likeness Principle
These keywords were added by machine and not by the authors. This process is experimental and the keywords may be updated as the learning algorithm improves.
This is a preview of subscription content, log in to check access.