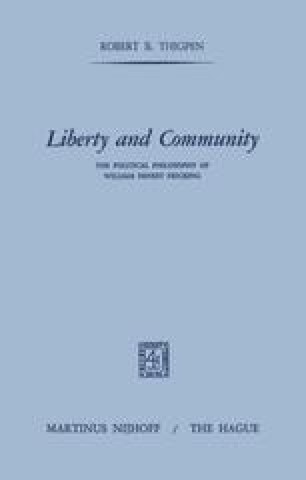 Perspectives on the Study of Man

Hocking’s inquiry into the nature of man, society, and political institutions is philosophical. He sees that “political problems, domestic or international, always involve us in psychological and philosophical issues.”1 His approach is that of the classical political philosophers — philosophical reflection on the basis of personal immersion in political life and dialogue with other thinkers engaged in similar reflection. He is thus a political philosopher in the tradition of Plato and Aristotle, Augustine and Aquinas, Hobbes and Locke. Since this approach may seem dated, it must be justified before a detailed treatment of his political thought can begin. This chapter is, however, more than an apology for a particular style of inquiry. It explores Hocking’s criticism of the method which now dominates the social sciences, and it discusses his justification for the approach of political philosophy.

Natural Science Scientific Method Political Philosophy Political Theory Moral Sense
These keywords were added by machine and not by the authors. This process is experimental and the keywords may be updated as the learning algorithm improves.
This is a preview of subscription content, log in to check access.